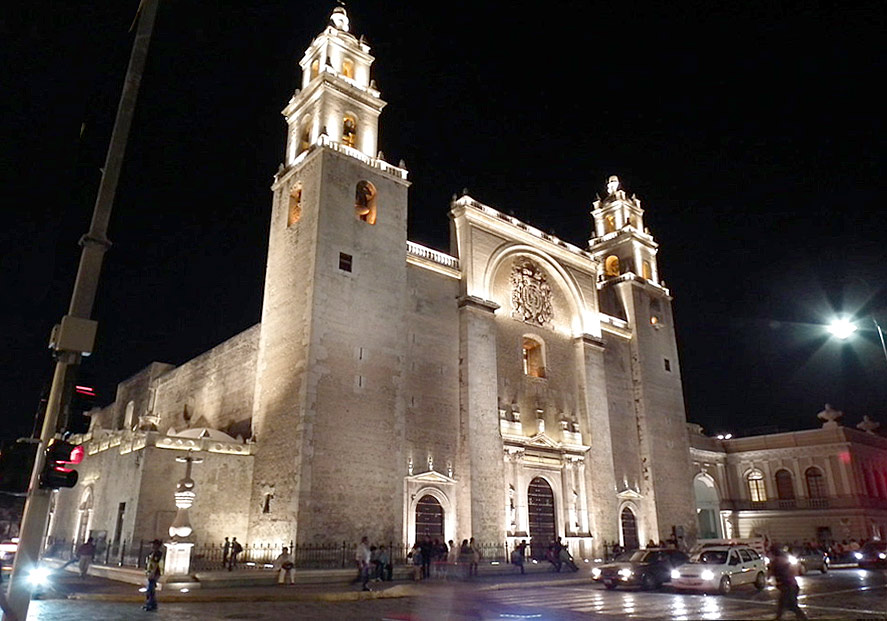 The Cathedral of San Ildefonso

When one hears about centuries-old cathedrals, rich in history and legends, it is very common that one thinks about the gothic cathedrals of the Old World like Notre Dame. But let us surprise you a little bit as we tell you that we also have them here in America. And you are lucky enough that we have on the greatest here in Mérida: the Cathedral of San Ildefonso.

Located in Méridas historic district, this great cathedral of renaissance-franciscan style is the oldest in all of continental America (and second oldest in all America). Only the catedral of the island of Santo Domingo predates this one. Nearly 230ft long, 100 feet wide, and its impressive vaulted ceilings and towers standing nearly 150 feet tall, this stunning stone cathedral is beyond doubt one of the most impressive in the whole continent.

Although the Yucatán peninsula was discovered by the Spaniards in 1517, it took several decades for them to conquer it. It wasn’t until 1542 that they were able to consummate the conquest of this territory and found the city of Mérida, capital of the province of Yucatán. And with that, the beginning of the presence of the Catholic church’s institution in the peninsula. Twenty more years would pass before the Pope Pío IV, acting on the request of king Felipe II, authorized the constitution of the cathedral in Mérida as a seat for the bishop on Yucatán and Cozumel, thus starting the building of the cathedral we now have. Building it would take over 30 years, from 1562 to 1598; but the wait was worth it.

This cathedral is an obligated stop for any lover of architecture, history, or religion that visits Mérida. It is open to the public every day of the week. You will just have to keep in mind that the cathedral is still in full use so there are still masses and other events held there nearly every day; all of them open to the public. 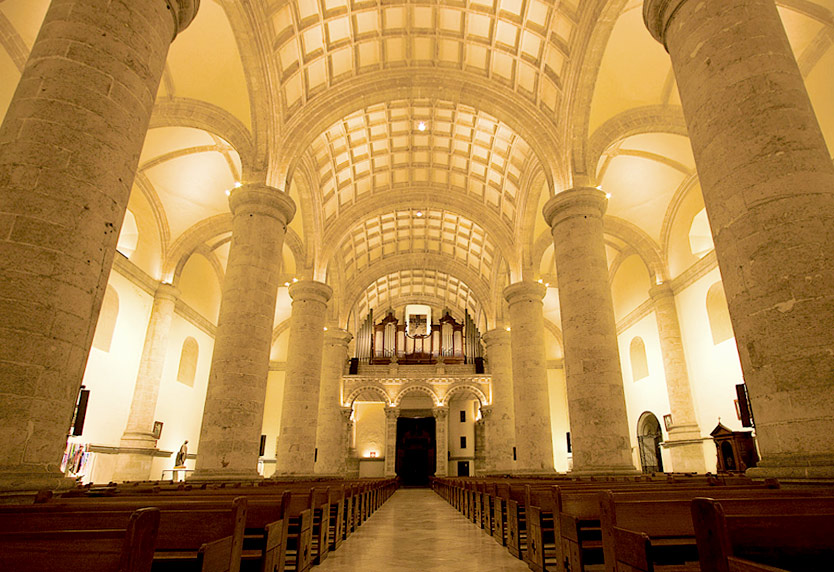 The cathedral remains in good conditions and restoration and renovation projects in recent years have ensured the survival of most of the cathedral’s original features. The only modification that it has endured during its the nearly 5 centuries since its founding was the demolition of two of its 5 original chapels at the beginning of the 20th century during the Mexican Revolution. Sadly, we cannot say the same of its treasure trove of sacred art; most if not all of the original art was stolen or destroyed during the political instability of the region throughout the 19th century and the plundering by revolutionary forces in 1915. Even then, the great splendor of this cathedral still stands.

Visiting the cathedral is pretty easy, you can visit at any time, any day, and it is conveniently located in a part of Mérida that you’ll sure want to visit anyways. Oh, one last reason for you to visit this sacred place: the Crucified Christ on the Mayor Altar is the largest indoors wooden crucified Christ of the world. Ok, now we have given you plenty of reasons to come visit the cathedral, and we did not even get through them all. When you visit Mérida, make sure you stop by the historic district and visit the incredible Cathedral of San Ildefonso.